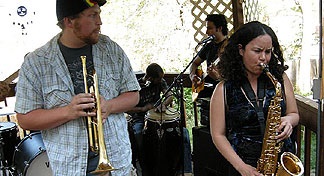 A New Musical Genre takes root in Denver On Sept. 20, a very unusual style of music was released online under the title of Sacred Paths. A live performance in support of the CD release was staged Sept. 24, at the D-Note in Arvada. The performance and CD are the culmination of the collaborative magic of a local jazz quartet with that of a fresh young hiphop duo. When the two combine, the result is an aesthetically pleasing fusion of nu jazz with compelling and imaginative spoken word. The jazz component of the players is known independently as Asia Jazz Project, named for sax player and composer Asia Fajardo, who seems to have drawn great inspiration from this project – it represents some of her best work to date.

'When a musician goes to work with other musicians, different energies help you bring out different things in yourself,' Fajardo said. 'So whoever I play with I take some of their energy too. Since all of this instrumentally is improvisation – we don't have any chords or any scales picked out – we just listen to each other. So you have to work harder but hou have more freedom. That just brings out different kind of energy.' The hiphop component of the project consists of the established duo Molina Soleil and Aju. Molina has recorded two solo Eps, one on a solo CD, compiled and appeared on a CD to promote the film Papers and, published a book of poetry titled The Age of Revision. Together they have recorded one EP and have another CD due to drop this November.

One might say the manner in which the music was recorded is as fresh and dynamic as the music itself. 'We started collaborating and rehearsing together in April '09 for a string of subsequent performances we did in Denver that month,' Aju said. 'from the get-go there was chemistry and a sense of fusion and flow with the mixing of our sounds, words and energy. For certain pieces, Molina Soleil and I shared our words with the musicians firsst, and then they improvised on the vibe of the spoken word. For other pieces, the order of the creative process was reversed, as Molina Soleil and I would write to the sounds of Asia Jazz Project's flow (Asia's sax in particular). 'It was total fusion,' Molina added. ':There was really no order. All tracks were recorded in one stream, everyone mic'd up and worked together improvisationally. It was pure magic.

It is all about re-connecting with what we already know. It's contemporary in the sense that we are packaging the music and the message in a modern format. But we're dealing with ancient wisdom, ancient knowledge and understanding.' In Sacred Paths and Rise Mantra, the sax and Aju's solo parts are close together because they represent the female energy,' Fajardo interjected. 'On City Night Speaks, I wrote the melody and Aju wrote the words. For Molina's poem, Letters to the Moon, I improvised according to what Molina's words were. This whole CD is very improvisational music.' Some tracks, like Sacred Paths, seek to awaken intrinsic or ancestral knowledge and bind it to a modern awareness and/or responsibility.

'In the high-speed world of now, the voices and ways of our antepasados oftentimes seem to be diminished and forgotten; the connection between one and one's environment torn; the alliance between fellow living creatures dishonored,' Aju explained. 'In many ways Sacred Paths is a journey that explores and reconnects many of our lost relations – especially the ancient wisdom which lives on in our intuition, or veins, and our solar system.'

The collective musicians seem to be tapping into the very tides of change that brought Barack Obama to the White House. 'Again, it's a new call for a return to the old ways, flipped into a new context,' Molina said. 'The collaboration is passionate and driven; it is new and old at once,' Aju stated. 'Change is prevalent; all life is sing-sang-sung . . . I think that Sacred Paths definitely reflects the motivation and spirit of changing times we feel pulsing heavily through global veins at this time.' Whatever the origins of their magic, the group has succeeded in creating music much greater than the sum of its parts. The use the elements of air, earth, wind and water to sculpt sound into urban canyons, soaring peaks, whispering breezes, morphing clouds and island-dotted oceans. 'This project is very elemental – it's very green,' Molina explained. 'It's all bout the earth and the cosmos and oure connection to all that is unseen, unheard, 'cause we are related and interconnected with all living things.

It is definitely about connecting urban people with the sky, helping rural folks to see their connection to urban inner-city landscapes, and asking all people to recognize we need to take better care of our skies, or oceans and our soil. 'I recently read in the NY Times that there have been well over 500,000 violations of clean water laws in recent times. That's ludicrous. People are starting to feel the effects. We need to challenge big money and demand that our politicians look out for the health and well-b eing of their constituents.' 'We have all come from very different musical backgrounds, which I believe has created something none of us have seen before,' Fajardo added. 'I think we share a common bond in our links to Mother Earth. I believe this common bond is what allowed us to put together this project.' 'We definitely bring each of our characteristic elements to the table, combine them and birth fusion,' Aju concluded.

'I think that through our combined forces we touch upon the fifth element – the center, the state of possibility, reflection and creation . . .' The CD is thoroughly impressive on many levels – the live performance evokes something larger than life – a tangible energy you can feel and virtually grasp in the ambient air. We are convinced they are creating well-intentioned musical magic. See if you'll fall under their spell by visiting MySpace and searching for asiajazz or soulaju. You will also find information on Molina Soleil and Aju on the SonicBids and ReverbNation websites. Perhaps the Lakota Sioux put it most succintly saying, 'Mitakuye Oyasin' or simply, 'We are all related.'