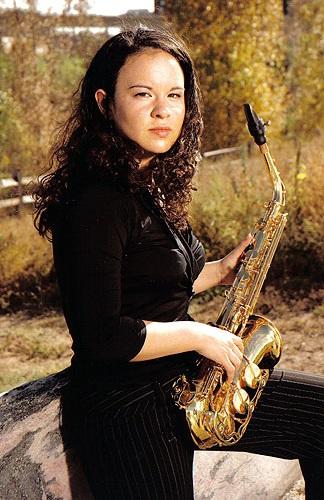 ASIA FAJARDO-WRIGHT : A NEW MUSICAL TALENT FROM THE ROCKY MOUNTAINS.

Asia Fajardo-Wright , born in Denver, has spearheaded the Asia Jazz Project Band for the last 5 years. Members include : Jim Dinser on guitar, Naim McKey on Bass, Antwon Owens on Drums and Asia playing Alto and Soprano Saxophone. For the past 3 years the band has toured their original music nationally. Asia Fajardo-Wright just finished two CDs which are called Sacred Paths and Ensamblando Culturas, which will be released by Mono Verde.

'Sacred Paths' is a collaboration between Asia and hip hop/spoken word artists Molina Soleil and Aju. It was released on September 20, 2009.

The other CD, called Ensamblando Culturas will be released November 21, 2009 and it has been produced by by the Latin Reggae Band Mono Verde.

Asia’s other passions: Aztec dancing and spiritual quest into the ancient religions of the Native American and other Central American cultures, which has greatly influenced her inspiration for compositions and performances.

The emotions evoked by her music are intense. The fusion of rhythms and perfect harmony bring a spiritual remembrance of ancient cultures while embracing very contemporary themes.

The Asia Jazz Project’s music has been used for two independent documentary films. Many special events, clubs and pubs in Colorado also use these compositions. There is something completely unique in this music and listening to it is an incredible experience.

When did you decide to go into a music career?
When I was in middle school, I just knew that I couldn't let go of my instruments (sax and piano), and that was all that I really wanted to do with my life. I found myself in music. It is a self that I am still finding, and self that evolves along with that music that I am making.

What inspired you choose the sax?
When I was little I always wanted to play music, and begged my parents for piano lessons. I started on clarinet when I was 9, but my hands are very small and could not cover the holes very well. It also hurt my wrist to have to hold it up. The saxophone has pads that cover the wholes and a neck strap, so I was set. I switched to alto sax when I was 10. The alto sax really fits my hands which are really little. I also play soprano sax. The voice of the sax is really my sound, and fits me more than any other instrument. I still play piano, but I use it mostly for composition.

You are also a composers of your songs. How does the inspiration comes to you?
I have a jazz quartet, and I write most the songs that we play. As a composer I love creating beautiful melodies, and using odd meter time signatures, and complex rhythms. I draw inspiration from the earth, and from all types of music. I have a song called 'Moonstars' that plays in the credits of a documentary about women leaders of the South West (USA) entitled'Corn Mothers.' I also have a song called 'Near and Far,' that I co-wrote with Spoken Word artist Aju, that is in the sound track of a documentary about undocumented youth in America called 'Papers.'

Tell me, you mentioned Astor Piazzola among your favorite musicians in your MySpace page. How did you know about this Argentinian musician and what do you like most in his music?
He wrote some etudes for saxophone that I studied in college, and after seeing these I wanted to learn more about his music and tango. I like his music because it is extremely complex, but at the same time is rich in emotion and human expression. I am blown away by the pure intensity of the emotions in his music. Piazzola as a musician and a composer, is someone who I am strive to be like.

You are also an Aztec dancer. Tell me about that?
I started dancing at the age of 7. Aztec dancing is traditional indigenous dancing from the Mexican people of central Mexico. The purpose of the danza is to develop the mind, body, and spirit. It also is about connecting with the earth and the universe. Growing up as an Aztec dancer has given me a different perspective of what it means to be a musician. Being a musician to me is a spiritual quest into enlightenment. I have performed all over the US as a dancer, and in Mexico.

Some people say that the vibrations of the sound from an instrument played live can heal. Do you believe that?
Yes I do. Sound waves are actual forces, and I believe they do have an effect on the listener. I always think that it is amazing how you can be sad, and after hearing your favorite song your mood changes. Music is very powerful.

Tell me about your best memories as a musician.
I just finished recording 2 CDs. One is 'Sacred Paths' by Asia Jazz Project featuring Molina Soleil and Aju and the other is 'Ensamblando Culturas' by Mono Verde. I think that being in the studio recording was an amazing experience. I felt this great sense of unity with the musicians I was recording with, and it reminded me that being a musician is not just about your self. Being a musician is about community.

I am always afraid that all my practicing is going to bother my neighbors, but I remember this one time that a neighbor of mine in Denver asked me what instrument I played. I told her sax, and said I hoped I didn't bother her. She told me that she liked to hear me play, and this is always a cute memory of mine.

Another memory I have is playing with my Jazz quartet Asia Jazz Project at Tenn Street Coffee in Denver for an art showing. It was summer, and my band played outside. There happened to be a lot of little kids around, and they loved dancing to our music. One little girl was about to accompany my drummer (she was headed for the drums).

Another fond memory is playing at a wedding where we had to play 'A Wonderful World' for the couples first dance. It felt really cool to be apart of someone's big day like that.

I teach my younger sister piano, and I will always remember her first recital. It is really wonderful to see someone you taught performing. I was so nervous, and I wasn't the one playing.

After we performed at 'Return of the Corn Mother's Symposium' we decided to record these two songs. After we did that we thought it would be cool to put together a whole CD. Aju and I wrote 'City Night Speak' together for the CD, which is a tribute to the city. The other songs on the CD are Soleil and Aju's peotry that we infused music into.

You are part of a band of 4 musicians. Tell me about them.
I have a jazz band called Asia Jazz Project, in it I have Jim Dinser on guitar, Naim McKey of Bass, Antwon Owens on Drums. We play my compositions, which are modern contemporary jazz. We have been together for 5 years and have played all of Denver at Festivals, Jazz Clubs, and Coffee Shops. We will begin working on putting out a CD in the fear future.

I am also in 9 piece Latin Reggea Band called Mono Verde, which plays all over Denver. I also have a project with Hip Hop/Spoken Word duo Molina Soleil and Aju.

What are your projects, your dreams?
I really just want to be the best musician, composer, and saxophonist that I can be, and play with great musicians. I hope that I can take my band, and my project with Molina Soleil and Aju, and Mono Verde on tour. These are all amazing bands and need to be heard. I love all types of music and want to play musicians from many different genres. I have an obsession with strings, so I really want to do some collaborations with string quartets and other types of string instruments.

I think that hardest thing that I have had to over come was self doubt, and the fear of failure. I was so afraid of what other people thought of my playing, that it was hurting my musical development. It has been really hard to overcome this, but by being patient with my self and letting my self know that it is okay to make mistakes, I am slowly becoming to understand what it means to really trust yourself and have faith in the music that you are playing.

This CD was very challenging because much of it was based in free improvisation, and we really had to listen and be in tune with each other. It was also a challenge because all the musicians were coming from different backgrounds, and we had to learn to make our different musical words unite. I think what made us all flow together was that we were doing a tribute to mother earth, and in a way had a common view of spirituality, self-transformation, and connectedness to the Earth.

Many people came together to put together 'Sacred Paths'. Sacred Paths features Denver-area musicians Antwon Owens on drums, Luis Chavez on percussion, and Lewis Mitchell Neeff on Piano. Will Ross of CHiTT Productions mixed and mastered the project and his artistic partner Dustin Neal designed the album art.

This 9 piece reggae band has been together for almost 2 years, and I have played with them for a little over a year. This band is lead by vocalist/guitarist/song writer and visual artist Rafa Torres. We play all over Denver. We will be releasing our CD 'Ensamblando Culturas' in about a month.

Recording a CD was so much fun. This has been a process. It took us a whole year to have the money to record our CD. The long studio hours were hard, especially on my face. However, having band mates running around with a video camera, a camera, and making jokes while others were being cued up to start recording helped keep us motivated. This band is like a family, so all the hard work didn't seem so hard.